On June 15, 2020, ARTICLE 19 MENA and MENA Rights Group submitted a legal analysis regarding the latest amendments to the Algerian Penal Code to the UN Special rapporteurs on freedom of opinion and expression and on the rights to freedom of peaceful assembly and association.

Law No. 20-06 amending and supplementing Ordinance No. 66-156 of June 8, 1966 on the Criminal Code, which entered into force on April 22, 2020, contains several provisions violating international standards on freedom of expression and freedom of association, including articles 19 and 22 of the International Covenant on Civil and Political Rights (ICCPR), ratified by Algeria in 1989.

Lack of parliamentary and democratic debate

On April 22, 2020, the Algerian government presented Law No. 20-06 amending the Penal Code to the parliament. In the context of the COVID-19 pandemic, the government chose to opt for a so-called “restricted” parliamentary debate. In these conditions, only the Minister of Justice, Mr Belkacem Zeghmati, took the floor to present his reform before immediately proceeding to a vote. Parliamentarians approved the text and the law entered into force on April 29, 2020, when it was published in the Official Gazette.

Law No. 20-06 introduces into the Criminal Code article 95 bis, which sanctions with “imprisonment of five to seven years and a fine of DA 500,000 to DA 700,000 DA, anyone who receives funds, a gift or an advantage, by any means, from a State, an institution or any other public or private body or from any legal or natural person, inside or outside the country, to carry out or incite to carry out acts likely to undermine the security of the State, the stability and normal functioning of its institutions, national unity, territorial integrity, the fundamental interests of Algeria or public security and order. The penalty shall be doubled when the funds are received within the framework of an association, group, organisation or agreement, regardless of its form or name.”

We are concerned that article 95 bis provides the authorities with excessive power to prosecute activists and human rights defenders receiving foreign funding if they consider that their peaceful advocacy activities undermine the “normal functioning of institutions” or “national unity”. This new measure is also detrimental to international and academic cooperation.

The introduction of custodial sentences of up to 14 years' imprisonment is also a matter of concern, especially as article 95 of the Criminal Code already contains sentences ranging from six months to five years of prison for anyone receiving “propaganda funds” from abroad in addition to financial penalties.

In its last concluding observations on Algeria, the UN Human Rights Committee expressed concern that “cooperation with foreign organisations and the receipt of funds from abroad are subject to prior clearance by the authorities”.

The offence of contempt

Law No. 20-06 increases the penalties provided for in article 144 of the Criminal Code. From now on, “anyone who, with the intention of violating their honour, delicacy or the respect due to their authority, insults a magistrate, civil servant, public officer, commander or law enforcement officer, either by words, gestures, threats, sending or handing over any object whatsoever, or by writing or drawing not made public” shall be liable to a prison sentence ranging from six months to three years, as opposed to two months to two years previously. The penalty may be increased to three years' imprisonment if the contempt is directed at an Imam.

It should be recalled that the mere fact that forms of expression are considered to be insulting to a public figure is not sufficient to justify the imposition of penalties, as the UN Human Rights Committee stated in its General Comment No. 34.

We note that the offense of “contempt” lacks legal clarity thereby undermining freedom of expression insofar as any critical or humorous expression that is considered to be prejudicial to the honour of judges, civil servants, law enforcement officials or Imams may be prosecuted and punished.

Article 144 of the Criminal Code in its previous and current versions has been used during the Bouteflika era to hinder the activities of journalists or human rights defenders such as Hassan Bouras, Mohamed Tamalt and Merzoug Touati.

More recently, Walid Kechidaa has been prosecuted on the basis of article 144. He is the founder of the “Hirak memes” Facebook page. He was remanded in custody on April 27, 2020 after posting humorous “memes” on this page.

Law No. 20-06 introduced article 196 bis into the Criminal Code, which punishes with “imprisonment for one to three years and a fine of DA 100,000 to DA 300,000, anyone who willfully disseminates or propagates, by any means, to the public false or slanderous information or news likely to undermine public security or order. In the event of a repeat offence, the penalty shall be doubled.”

We are concerned about the lack of a definition of “false information” in Law No. 20-06, thereby providing the authorities with disproportionate and discretionary power allowing them to suppress critical content and controversial information. With regard to the prison sentences provided for in Article 196 bis, we believe that less restrictive measures to combat “false news” could have been envisaged, such as the promotion of independent fact-finding mechanisms, state support for independent, diverse and adequate public service media, and public and media education, which have been recognised as less intrusive means to combat misinformation.

The legal analysis produced by ARTICLE 19 MENA and MENA Rights Group concluded that the provisions contained in Law No. 20-06 are incompatible with articles 19 and 22 of the ICCPR. Algeria should revise its criminal legislation to ensure that measures governing freedom of expression and association are in line with international standards. To this end, we recommend the lifting of excessive restrictions on access to foreign funding for NGOs and human rights defenders, the decriminalisation of defamation, and the introduction of alternative measures to combat false information that are less restrictive of the right to freedom of expression. 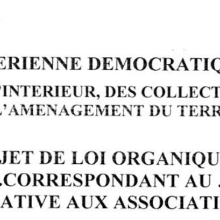 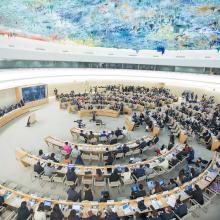