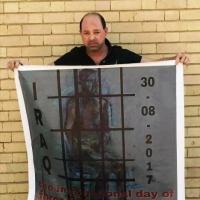 Imad Al Tamimi was arrested on July 14, 2018 after participating in a demonstration in Baghdad. He was subjected to torture during the first two weeks of his detention, and interrogated about his involvement with the NGO Al Wissam Humanitarian Assembly. Al Tamimi was held incommunicado until his release on September 7, 2018.

On July 14, 2018, Imad Al Tamimi participated in a demonstration on Al Mutanabbi Street in Baghdad in solidarity with demonstrators in the Basra governorate protesting corruption and the chronic mismanagement of resources by the Iraqi government.

Later the same day, he was arrested by officers from the Special Weapons and Tactics (SWAT) Unit, who did not show a warrant nor give any reasons for his arrest. The abduction occurred in the vicinity of the “Medical City” in Baghdad. Al Tamimi was forced into a black pick-up truck before being transferred to an unknown location and interrogated.

While detained in a secret facility run by the SWAT, Al Tamimi was subjected to acts of torture for the first two weeks of his detention. Methods used included severe beatings all over his body and repeated electric shocks to his limbs.

Al Tamimi was interrogated about his involvement with the Al Wissam Humanitarian Assembly, an NGO documenting cases of enforced disappearance in Iraq. He was also questioned about his relationship with the founder of the organisation, Salam Al Hashimi, as well as about the issue of enforced disappearances in Iraq in general. Al Tamimi was also questioned about “Jurf Sakhar”, a secret detention facility operated by the Hezbollah Brigades, and about whether he knew anyone detained there. He was then forced to sign a document stating that he would no longer participate in any event related to enforced disappearances in Iraq, and that if he failed to do so, he would be re-arrested along with his brothers.

Al Tamimi was held incommunicado until September 7, 2018, when was transferred blindfolded from the unofficial detention centre to Aden Square, where he was released.

On October 2, 2018, a number of UN Special Procedures mandate holders raised concerns over allegations of reprisals against Al Tamimi as well as human rights defender Israa Al Dujaili, stating their “concerns in this case are heightened by the fact that these acts of violence might be in reprisal for their cooperation with the United Nations, its representatives and mechanisms in the field of human rights.”

A number of other employees and volunteers of Al Wissam Humanitarian Assembly have also been subjected to acts of intimidation and reprisal, including Israa Al Dujaili, whose case – along with that of Al Tamimi – was raised by MENA Rights Group ahead of the preparation of the Secretary-General’s 2019 report on reprisals.

April 15, 2021: MENA Rights Group refers case to the Secretary-General on intimidation and reprisals for cooperation with the UN in the field of human rights.
September 9, 2019: Mentioned in the Secretary-General’s 2019 report on reprisals.
May 1, 2019: MENA Rights Group raises case with UN Assistant Secretary-General for Human Rights ahead of the preparation of the Secretary-General’s 2019 report on reprisals.
September 7, 2018: Released.
July 14-September 7, 2018: Held incommunicado, subjected to acts of torture for two weeks, interrogated about his involvement with NGO Al Wissam Humanitarian Assembly.
July 14, 2018: Participates in a demonstration in Baghdad; arrested by officers from the Special Weapons and Tactics (SWAT) Unit later the same day.