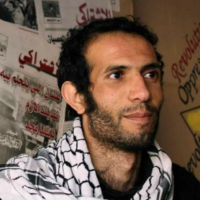 On May 12, 2019, human rights lawyer Haitham Mohamadein went missing after he was arrested at El Saf police station in Giza, where he had been summoned. He reappeared before the Supreme State Security Prosecution (SSSP), which charged him with “joining a terrorist organisation” and ordered his pre-trial detention. In March 2021, Mohamadein was added by the SSSP to a new case on similar accusations. He was held at a Central Security Forces Camp on the Cairo-Alexandria Desert Road for over three years before being released on September 15, 2022.

Mohamadein is an Egyptian lawyer, human rights activist, member of the Al Nadim Centre for the Rehabilitation of Victims of Violence and Torture and a well-known workers’ rights defender.

On May 12, 2019, Mohamadein was summoned to El Saf police station in Giza in relation to the probationary measures issued against him in Case No. 718 of 2018, a case in which he was charged on May 19, 2018, with “aiding a terrorist organisation to achieve its goals” and “calling for illegal protests”. His prosecution in this case was condemned by several UN Special Procedures in a joint allegation letter and a press release highlighting the “systematic targeting of human rights defenders” by the Egyptian authorities.

On May 16, several of Mohamadein’s colleagues saw him by chance while he was being brought before the SSSP. They discovered that Mohamadein was being prosecuted in another case (Case No. 741 of 2019) on allegations of “joining a terrorist group”. The prosecutor questioned him about his “suspected intention” to carry out advocacy and to protest or call for protests during the upcoming Africa Cup of Nations, accusations that Mohamadein denied. The prosecutor ordered his 15-day pre-trial detention, which was subsequently renewed multiple times.

Mohamadein was then transferred to a Central Security Forces Camp on the Cairo-Alexandria Desert Road, where he is currently being held.

On July 19, 2019, several UN Special Procedures mandate holders sent a joint allegation to the Egyptian authorities (AL EGY 7/2019), expressing their concerns regarding the prosecution of Mohamadein and the conflation of peaceful public protest, and criticism, with terrorism.

On November 27, 2019, the Cairo Criminal Court ordered Mohamadein’s conditional release. However, on November 28, 2019, the prosecution successfully challenged the court order.

On December 2, 2021, MENA Rights Group submitted Mohamadein’s case to the UN Working Group on Arbitrary Detention, asking them to issue an Opinion as to the arbitrary nature of his detention. MENA Rights Group highlighted the fact that Mohamadein was subjected to the practice of “rotation” (tadweer), which is used by the Egyptian authorities to circumvent pre-trial detention maximum periods and prolong the detention de facto indefinitely.

On September 15, 2022, the Egyptian authorities ordered the release of a group of 46 pretrial detainees, including Mohamadein.

September 15, 2022: Mohamadein is released.
December 2, 2021: MENA Rights Group requests the UN Working Group on Arbitrary Detention (WGAD) to issue an Opinion on Mohamadein’s case, arguing that he is subjected to the practice of “rotation” and is therefore detained arbitrarily.
March 10, 2021: Mohamadein is added by the SSSP to a new case (Case No. 1956/2019), based on the accusation of “joining a terrorist organisation”.
March 8, 2021: The Cairo Criminal Court ordered his release on probation in Case No. 741/2019.
June 2, 2020: UN experts send another joint allegation to the Egyptian authorities (AL EGY 7/2020).
November 28, 2019: State prosecution appeals the court order, resulting in the order being revoked.
November 27, 2019: The Cairo Criminal Court orders Mohamadein’s conditional release.
July 19, 2019: Several UN Special Procedures mandate holders send a joint allegation (AL EGY 7/2019) to the Egyptian authorities regarding Mohamadein’s case.

May 29, 2019: MENA Rights Group requests the intervention of several UN Special Procedures mandate holders.
May 16, 2019: Mohamadein is brought before the SSSP, which charges him with “joining a terrorist group” (Case No. 741/2019) and orders his pre-trial detention. He is transferred to Central Security Forces Camp on the Cairo-Alexandria Desert Road.
May 14, 2019: Police officers submit report to the prosecution on Mohamadein’s alleged lack of compliance with probationary measures.

May 13, 2019: Police officers at first deny his detention, then acknowledge his custody in El Saf police station while denying his right to receive visits or make contact with the outside world.

May 12, 2019: Mohamadein is summoned to El Saf police station in Giza, arrested and disappeared.