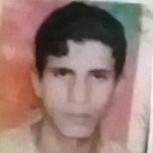 In June 2014, Al Janabi was arrested from his home in Musayib, in the Babylon Province by officers from the Hezbollah militias and the Iraqi military, and taken towards Jurf Al Sakhar. While the arresting officers informed Al Janabi’s family that he would be released after interrogation, he did not reappear, and his fate and whereabouts remain unknown to date.

On June 16, 2014, at around 1 p.m., between eight and ten officers from the Hezbollah militias and military forces driving Hummers and Silverado cars arrived at Al Janabi’s home in Musayib, in the Babylon Province. Some of the officers were dressed in military clothes, while others wore civilian attire. They arrested Al Janabi without showing a warrant nor giving any reason for his arrest, before driving towards Jurf Al Sakhar – an area that was under the control of the Hezbollah militias at the time.

Al Janabi’s family were informed that he would be released after interrogation, but he did not reappear.

In the week following Al Janabi’s arrest, his family enquired about his fate and whereabouts at Al Hamia Police Station, the Central Criminal Court, Ministry of Interior and Baghdad Airport Prison, among others, but to no avail.

May 6, 2019: MENA Rights Group and Al Wissam Humanitarian Assembly request urgent intervention of the UN Committee on Enforced Disappearances.
June 28, 2017: Decision is issued by the headquarters of the Iraqi Air Force command, declaring that Al Janabi was disappeared as a result discharging his military duties.
November 11, 2015: Charged in absentia with having deserted the Iraqi army.
June 2014: Family enquires about his fate and whereabouts at Al Hamia Police Station, the Central Criminal Court and the Ministry of Interior, among others.
June 16, 2014: Arrested from his home by officers from the Hezbollah militias and military forces.