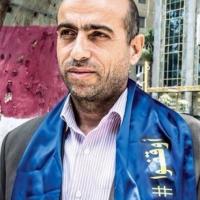 On September 10, 2017, human rights defender Ebrahim Metwally was on his way to Geneva to attend a meeting with the United Nations Working Group on Enforced or Involuntary Disappearances when he was arrested at Cairo International Airport. Metwally was accused by the Supreme State Security Prosecution (SSSP) of “founding and leading an illegal group”, “publishing and spreading false news”, and “communicating with foreign parties to support him in spreading the group’s ideas”. In November 2019, he was charged again in a new case with “joining a terrorist group”, “spreading false news”, “misusing social media”, and “funding of a terrorist group”. In September 2020, he was further accused of “leading a terror group”. He is currently being held in solitary confinement in Tora prison and has not yet been brought to trial.

Ebrahim Metwally is the co-founder and coordinator of the Association of the Families of the Disappeared, which provides the relatives of victims of enforced disappearance in Egypt with legal counselling, including through the submission of cases to the United Nations Working Group on Enforced or Involuntary Disappearances (WGEID). Metwally is the father of Amr Ibrahim Abdel Metwally Hegazy, who remains missing since his arrest on August 7, 2013, and whose case was submitted by his father to the WGEID.

On September 10, 2017, Metwally was on his way to Geneva to attend a meeting with the WGEID when he was arrested by members of the Egyptian security forces and airport police at Cairo International Airport, and taken to an unknown place of detention.

He reappeared on September 12, 2017 before the SSSP, which extended his detention pending investigation in Case No. 900 of 2017 on charges of “founding and leading a group established in contravention of the provisions of the law”, “publishing and spreading false news”, and “communicating with foreign parties to support him in spreading the group’s ideas”. A letter from the WGEID inviting Metwally for a meeting in Geneva was used by the prosecutor as inculpatory evidence. He was detained in Al Aqrab maximum security section of Tora prison.

On September 15, 2017, two UN human rights experts expressed grave concern about Metwally’s arrest, and the Assistant Secretary-General for Human Rights highlighted the case while presenting the annual report on reprisals to the Human Rights Council in Geneva later the same month.

On July 31, 2018, Egypt provided a further update on the case, confirming that Metwally had been charged with “leading a terrorist group” and “spreading false news”, and that he was still being investigated. For at least two of the proceedings, Metwally’s lawyers were notified with adjournment dates that differed from the days in which Metwally was physically present in the courtroom, affecting both his right to prepare his defence and the possibility for the lawyers to enquire into the treatment he was receiving in detention.

On August 14, 2019, the WGAD adopted Opinion No. 41/2019 confirming that Metwally’s ongoing detention is arbitrary under categories I, II, III and V. In addition, the WGAD expressed its grave concern at Metwally’s state of health and has referred his case to the Special Rapporteur on the right of everyone to the enjoyment of the highest attainable standard of physical and mental health.

On September 9, 2019, the UN Secretary-General raised Metwally's case in 2019 report on reprisals against individuals who cooperate with the UN in the field of human rights.

The SSSP ordered his release on October 14, 2019, however, he was kept in detention by the authorities. On November 5, 2019, a new case was brought against Metwally (Case No. 1470 of 2019) and he was charged with “joining a terrorist group”, “spreading false news”, “misusing social media”, and “funding of a terrorist group”.

Between February 2019 and February 2020, the prison administration did not allow Metwally’s family to visit him, despite permission being granted by the prosecution to allow such visits. During this period, the abuses against Metwally intensified.

On August 26, 2020, the Criminal Court of Cairo renewed the order to release Metwally under precautionary measures in Case No. 1470 of 2019. The nature of the precautionary measures is unknown. However, Metwally was kept in detention. On September 6, 2020, the Egyptian Commission for Rights and Freedoms (ECRF) reported that Metwally was investigated by the SSSP in Case No. 786 of 2020 and charged with “leading a terror group”, which the Egyptian authorities have accused him of having formed during his transfers to and from the prosecution for pre-trial renewals.

On September 29, 2021, the UN Secretary-General raised Metwally’s case in 2021 report on reprisals against individuals who cooperate with the UN in the field of human rights.

On December 2, 2021, MENA Rights Group submitted Metwally’s case to the UN Working Group on Arbitrary Detention, asking them to issue an Opinion as to the arbitrary nature of his detention. MENA Rights Group highlighted the fact that Metwally was subjected to the practice of “rotation” (tadweer), which is used by the Egyptian authorities to circumvent pre-trial detention maximum periods and prolong the detention de facto indefinitely.

Metwally is currently being held in solitary confinement in Tora prison. His conditions of detention are extremely poor, and he has been subjected to systematic physical and psychological abuse amounting to torture and ill-treatment. Despite suffering from acute prostatitis and serious vision problems – a result of the lack of lighting in the solitary confinement cell – he has not been allowed to be examined by medical specialists. His family are able to visit him once every month.