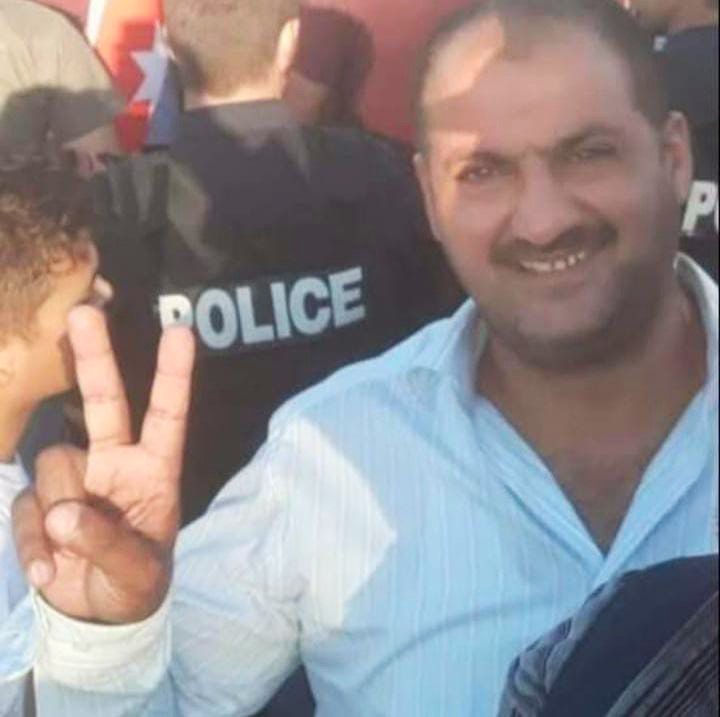 Kamil al-Zoubi is Jordanian political activist who has been repeatedly arrested for exercising his right to freedom of expression. Since 2014, he was arrested six times. On each occasion, he was detained for periods ranging from two weeks to nine months. He was last arrested in Ramtha on October 30, 2022. He was charged with “vilifying an official body and the Parliament Council”, “broadcasting false news” and “harming the reputation of the State (Jordan)” after having advocated for the release of political detainees and for having shared information, disclosed by the activists’ lawyers, about their situation. On November 29, 2022, Mr al-Zoubi was released on bail.

Kamil al-Zoubi is a Jordanian political activist. Since the beginning of the Arab Spring in late 2010, he participated in peaceful protests calling for reforms and accountability for corruption.

Since 2014, he was arrested six times. On each occasion, he was detained for periods ranging from two weeks to nine months.

Al-Zoubi was first arrested by agents of the General Intelligence Directorate (GID) in Irbid on December 22, 2014. When he was later presented before the State Security Court, he was charged with “insulting the king and undermining the regime”. In January 2015, he was released on bail and placed under a travel ban.

On September 3, 2018, al-Zoubi and another activist were arrested by members of the GID in Irbid. They were then referred to the State Security Court and detained for 14 days pending investigation. They were both charged with “insulting the King”, “undermining the regime” and “defaming an official body and inciting sedition”. Al-Zoubi was detained for 88 days until he was released on a bail. One month later, he was sentenced to one year in prison by the State Security Court.

His lawyer appealed the verdict and his sentence was reduced to 88 days, corresponding to the time he had already served. He was again issued a travel ban.

On May 11, 2019, his house was raided by members of the General Intelligence Directorate. He and his younger brother were both arrested. He was referred directly to the State Security Court and charged with “undermining the regime”, “changing the entity of the state” and“attempting to change the political rule in Jordan”.

His trial before the State Security Court began on September 1, 2019. On January 14, 2020, he announced that he would go on a hunger strike. As a result, he entered the court on a stretcher when he was presented before the president of the court and the Public Prosecutor on February 9, 2020. He was then provisionally released pending trial. The court has yet to rule on the aforementioned charges.

On December 23, 2020, the Anti Cyber-Crimes Unit of the Public Security Directorate interrogated him. He was detained for one day, before he was released on bail. He was later charged with three counts of defamation by the Prosecutor of the Ramtha Court. Two charges out of three were dropped. He is still being prosecuted for the third charge.

On March 15, 2021, he was arrested along with 15 other persons at the roundabout of Ramtha after the events of al-Salt hospital. In the context of the Covid-19 crisis, people demonstrated against the oxygen shortages that caused the death of several patients. They were charged with violating the defence law and stirring up sedition. They were detained for 17 days before being released on bail. He and the other defendants are still awaiting trial.

In October 2021, the Jordanian Prime Minister filed a defamation lawsuit against him after he tweeted that his wife “received money by exploiting her husband’s position”. As a result, the Public Prosecutor ordered his arrest and charged him under several provisions of the Cybercrime Law. After 25 days, he was released after the Prime Minister withdrew his complaint.

In late September 2022, new charges were pressed against him and his lawyer, Firas Al-Rousan, in reprisal for having advocated for the release of political detainees. The charges were pressed by the public prosecutor of Amman. On August 20, 2022, al-Zoubi shared on his Facebook account a statement of Al Rousan about his last visit to one of his clients who claimed having been subjected to torture.

A hearing was scheduled for this case on September 27, 2022 before the Amman Criminal Magistrate Court but was adjourned to October 9, 2022 because al-Zoubi had not been notified in advance. The charges pressed are based on several provisions of the Cybercrime Law, including “vilifying an official body and the Parliament Council”, “broadcasting false news and “harming the reputation of the State (Jordan)”.

On October 30, 2022, he was arrested in the city of Ramtha. He was detained until the next morning in the security detention center of Ramtha before being transferred to Amman in order to be presented before the magistrate judge. He was only able to contact his family on November 1, 2022.

On November 3, 2022, he was presented before the magistrate’s court of Beni Kananah in Amman who ruled that he should remain in detention. At the time of writing, al-Zoubi remains detained in Bab al-Hawa prison, Irbid.

Al-Zoubi’s successive deprivations of liberty, including the current one, appear to be directly related to the exercise of his right to freedom of expression. He has been repeatedly prosecuted on the basis of provisions contained in the Penal Code, the Cybercrime law, and the Defence Law, all of whichdo not comply with article 19 ICCPR, which Jordan ratified.

The Jordanian authorities also used emergency legislation brought in at the onset of the Covid-19 pandemic in 2020 to quash dissent, including activating the Defense Law of 1992, which grants the Prime Minister expansive powers to curtail basic rights.

On November 11, 2022, MENA Rights Group submitted an urgent appeal to the UN Special Rapporteur on the promotion and protection of the right to freedom of opinion and expression and the UN Working Group on Arbitrary Detention urging them to call on Jordan to drop all charges pressed against al-Zoubi.

On November 29, 2022, Kamil had a hearing and his lawyer requested a release. The judge granted his release, but under the condition to pay a financial guarantee of 5 000 Jordanian Dinars.

November 29, 2022: Kamil is released on bail.
November 11, 2022: MENA Rights Group sends an urgent appeal to the Special Rapporteur on the promotion and protection of the right to freedom of opinion and expression and the Working Group on Arbitrary Detention.
October 30, 2022: Kamil al-Zoubi is arrested reportedly in reprisal for having advocated for the release of political detainees and for having shared information, disclosed by the activists’ lawyers, about their situation.
October 2021: Al-Zoubi is arrested after the Prime Minister took legal action against him following comments he made on Twitter about a transaction received by the Prime Minister’s wife; he is released 25 days later, after the Prime Minister withdrew his lawsuit.
March 15, 2021: Al-Zoubi is arrested along with 15 other persons in the context of protests that erupted after oxygen ran out in the city’s hospital of al-Salt leading to deaths of COVID-19 patients; he is released on bail 17 days later.
December 23, 2020: Al-Zoubi is questioned by the Anti Cyber-Crimes Unit of the Public Security Directorate and prosecuted on three counts under the Cybercrime law, two of which were later dropped. He has not yet been tried on the third charge.
February 9, 2020: Al-Zoubi is provisionally released pending trial following a hunger strike.
September 1, 2019: His trial before the State Security Court begins.
May 11, 2019: Al-Zoubi is arrested at his home by the General Intelligence Directorate (GID), referred to the State Security Court and charged with “undermining the regime”, “changing the entity of the state”, and “attempting to change the political rule in Jordan”.
September 3, 2018: Al-Zoubi and activist Khaled al-Fakhri Abu Islam are arrested by the GID in Irbid before being charged with “insulting the King”, “undermining the regime” and “defaming an official body and inciting sedition; al-Zoubi is released after 88 days in detention after his one-year prison sentence was reduced on appeal.
January 2015: Al-Zoubi is released and placed under a travel ban.
December 2014: Al-Zoubi is arrested by the GID, charged with “insulting the king and undermining the regime”.