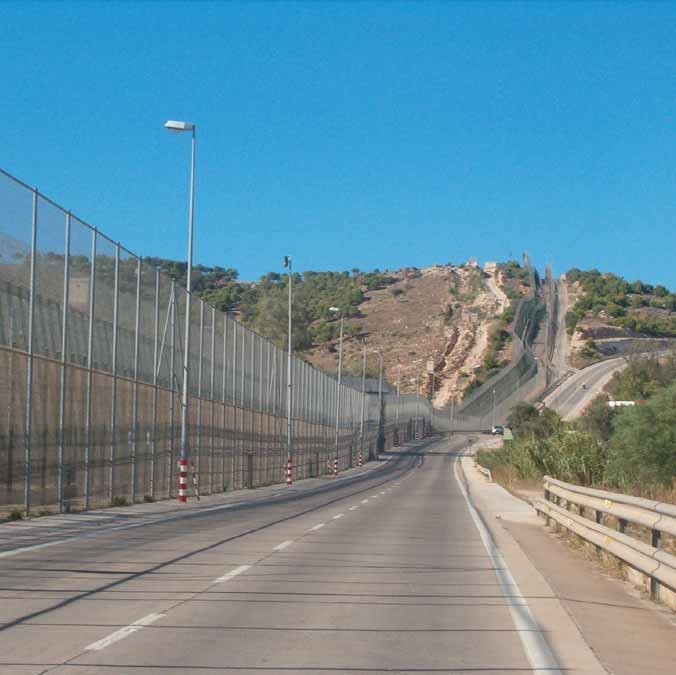 Lire la page en français
On June 24, 2022, A.O., a Sudanese national, attempted to cross the border between Morocco and the Spanish enclave of Melilla, joining a group of nearly 2,000 migrants. During this attempt, he witnessed and was subjected to multiple violations by Spanish and Moroccan security forces. At least 23 people died while trying to cross the border. Many were detained while others like A.O. were dispersed throughout the country to prevent further attempts.

A.O. is a Sudanese national from the Darfur region. He arrived in Morocco in 2021 in hopes of reaching a European Union country in which he would apply for asylum.

Early in the morning of June 24, 2022, nearly 2,000 migrants, including A.O., attempted to cross the border between Morocco and the Spanish enclave of Melilla.

As they came closer to the high chain-link fences surrounding Melilla, Spanish and Moroccan security forces used excessive force to prevent them from crossing of the border.

The Spanish civil guards used tear gas and rubber bullets, while, the Moroccan law enforcement agencies, composed of the Auxiliary Forces, the National Security, the gendarmerie, the army and local security forces, hit individuals with truncheons.

According to the official death toll established by the authorities, 23 people died on June 24, 2022. Non-governmental sources put the death toll at 27 or even 37. As early as June 26, graves were dug in the cemetery of Nador to bury the bodies the deceased. The Moroccan authorities were then accused of having tried to organise collective burials in haste, “without investigation, without autopsy, without identification”.

Dozens of migrants who tried to cross the border are currently being prosecuted for “illegal entry into Morocco,” “violence against law enforcement officers,” “armed gathering” and “refusal to comply”. Others have been charged with “participating in a criminal gang to organise and facilitate illegal immigration abroad”. Their trial started on July 4, 2022 before the first instance court in Nador.

Having failed to reach Spanish territory, A.O. and other migrants were forced by Moroccan law enforcement agents to board buses that dispersed them across the country. Despite the abuse they suffered, they received no medical assistance during their transfer. After arriving at their destination, A.O. and other migrants went to the hospital, but the staff reportedly refused to assist them, claiming that they did not need any care. Finally, A.O., like others who attempted the crossing, had several personal belongings confiscated by law enforcement agents.

The events of June 24, 2022 illustrate the coordination of Moroccan and Spanish migration policies, which has been marked by numerous human rights violations. Moroccan Auxiliary Forces and the Spanish Guardia Civil regularly use excessive force against migrants who try to enter the Spanish enclaves of Melilla and Ceuta.

Affirming that the joint intervention by Spanish and Moroccan security forces on June 24, 2022 did not comply with the Basic Principles on the Use of Force and Firearms by Law Enforcement Officials, MENA Rights Group sent a communication to the UN Special Rapporteur on Torture and Other Cruel, Inhuman or Degrading Treatment or Punishment and to the UN Special Rapporteur on the Human Rights of Migrants calling for an independent, effective, and thorough investigation into the events of June 24.

The trial of 37 migrants arrested by the Moroccan authorities following their attempt to cross the border begins in Nador.