At a well-attended United Nations Human Rights Council (HRC) side event entitled “Saudi Arabia – Time for Accountability”, panelists including two UN Special Rapporteurs called for the immediate release of human rights defenders, including lawyers, journalists, and women’s rights activists, who have been arbitrarily detained or disappeared in a lengthy crackdown on dissent that peaked in 2018 around the time women were allowed to drive. Participants also called for an immediate end to the use of torture and abuse, such as solitary confinement and sexual assault, against women human rights defenders.

The event on March 4, 2019 was organised by: Right Livelihood Award Foundation, MENA Rights Group, World Organisation Against Torture (OMCT) and the Gulf Centre for Human Rights (GCHR). It was co-sponsored by ALQST, CIVICUS, Global Fund for Women, Women’s March Global, the International Service for Human Rights (ISHR), and Equality Now.

Moderator Gerald Staberock of OMCT opened the event noting that its purpose includes discussing ways to engage the international community, as well as the role of Special Procedures in ensuring that the Saudi authorities are held to account.

Fionnuala Ní Aoláin, Special Rapporteur on the promotion and protection of human rights and fundamental freedoms while countering terrorism, spoke of the impact of the disproportionate counter-terrorism measures on fundamental freedoms in Saudi Arabia. She discussed the findings of the former Special Rapporteur’s report from a visit in April and May 2017 to Saudi Arabia, noting the problematic nature of the broad definition of “terrorism” under the law, which penalises activities that are protected internationally including peaceful protests. She said, “These laws are used to directly attack and limit the rights of prominent human rights defenders, religious figures, writers, journalists, academics, civil activists.” She noted that when the former Special Rapporteur visited Saudi Arabia, he was denied access to individuals who were detained for exercising their freedom of speech. She stated that the counter-terror law is inconsistent with international law and is furthermore ineffective.

Recommendations made by the Special Rapporteur and by the UN Committee against Torture (CAT) to urgently bring the definition of terrorism in line with international standards have been ignored. In fact, the Saudi authorities adopted a new counter-terrorism law in 2017, initiating an even more repressive crackdown on the exercise of internationally protected civil and political rights. There is serious concern over the lack of independence of the Specialised Criminal Court (SCC), set up to try cases of state security and terrorism, which has increasingly been misused to stifle dissent and persecute rights defenders. The Special Rapporteur further noted the failure of the SCC to take account of torture used to extract confessions and that torture complaints have not been investigated. There is a fundamental lack of safeguards for detainees, who are tortured with impunity.

Michel Forst, Special Rapporteur on the situation of human rights defenders, noted that his offer to visit Saudi Arabia had been refused, and reiterated his offer to the government to visit in order to provide assistance. In his communications for the past year he noted a real crackdown on human rights defenders and the restrictions on freedom of expression and assembly, particularly on women involved in the right to drive campaign and in protesting the guardianship system. “What is of great concern to me is that all those involved have been held incommunicado in undisclosed locations.” These violations were raised in his report released last month on The Situation of Women Human Rights Defenders. He concluded, “The work of defenders is not against national security, but rather enhances the function of a free and liberal society in promoting a dialogue on policy matters.” 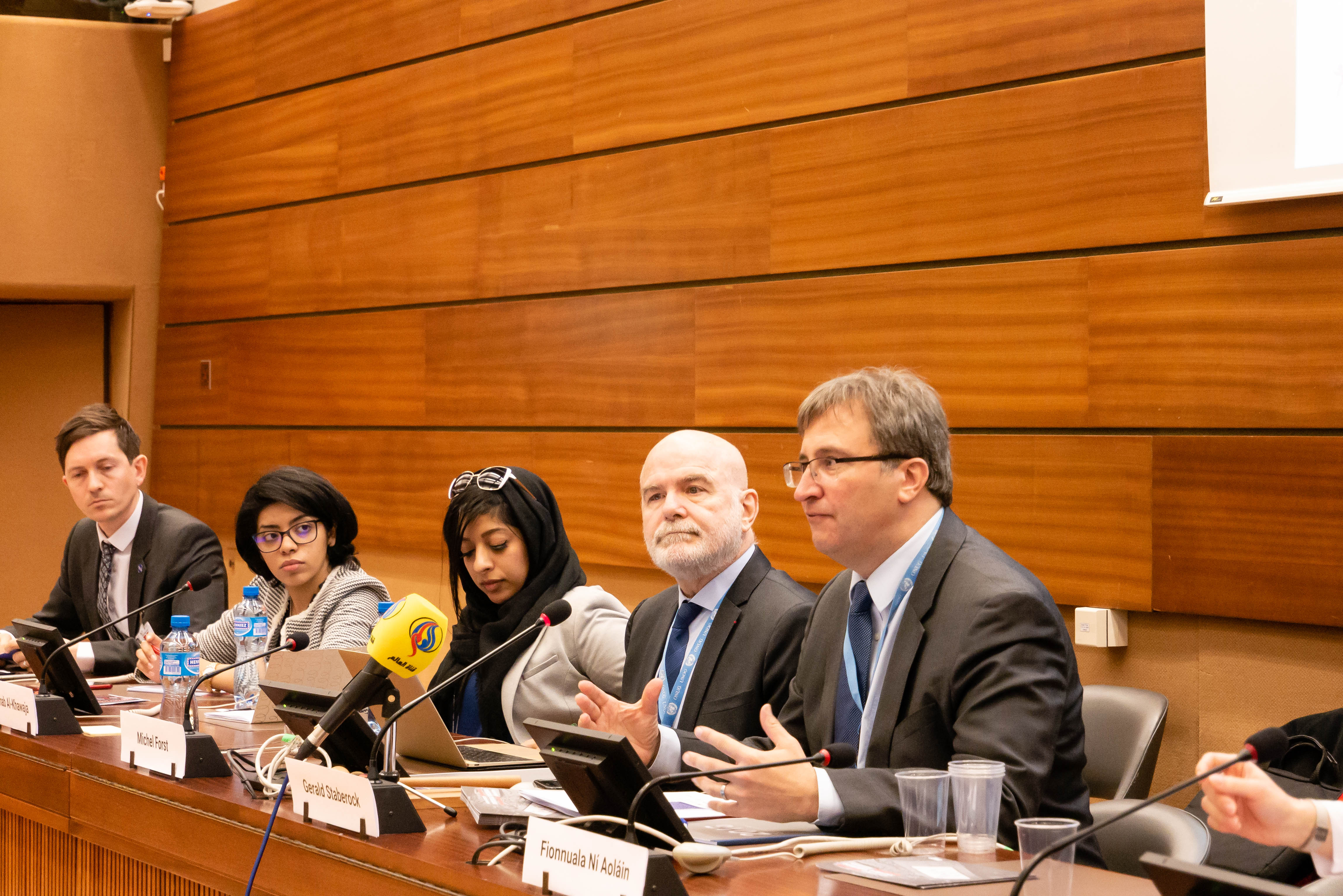 "All detained women human rights defenders should be released immediately without any conditions. The perpetrators who tortured them have to face justice," said GCHR’s Zaynab Al-Khawaja, who was imprisoned in Bahrain. She said long-term solutions are important, and noted, “Because of international pressure I was released two years ago, however I can’t go back to my country because if I go back I will be sentenced. We don’t want human rights defenders to just be released, but to be able to continue to do the work they are doing.” She noted that torturers walk around freely on the streets in Gulf countries, but human rights defenders do not.

At the event, GCHR launched a new GCHR report that details the brutal and humiliating torture and sexual abuse to which women human rights defenders in Saudi Arabia continue to be subjected, including electrocution, flogging, whipping on the thighs and being stripped naked before being sexually assaulted. Testimonies recount that this abuse has left some of the women unable to walk or stand properly with uncontrolled shaking and marks on their bodies. At least one of them has attempted suicide multiple times.

Over twenty human rights defenders campaigning for women’s rights have been arrested since May 2018, with at least 15 of them remaining in prison, many of whom were referred to the SCC just this month. Detained women’s rights defenders from the past year’s crackdown include Loujain Al-Hathloul, Aziza Al-Yousef, Eman Al-Nafjan, Nouf Abdelaziz, Dr. Hatoon Al-Fassi, Samar Badawi, Nassima Al-Sadah, Mohammed Al-Bajadi, Amal Al-Harbi, and Shadan Al-Anezi. Others cannot be named.

During the discussion, Omaima Al-Najjar, a Saudi blogger and woman human rights defender, said international pressure can help, such as in the case of Israa Al-Ghomgham, a woman activist arrested in 2015 who was facing the death penalty - which was dropped after international condemnation. Other rights defenders have had their sentences reduced. However, she said, some of these reports of torture are “just the tip of the iceberg.” She said, “The Saudi government has passed some cosmetic reforms to distract from the human rights abuses they have committed. Although women can now drive, the women who campaigned for this change are still in prison.”

Saudi human rights defender Yahya Assiri of AlQST mentioned some cases of well-known human rights defenders, such as Walid Abu Al-Khair, who was tried before the SCC and accused of being in contact with “foreigners”, including the BBC and Amnesty International. For this he was sentenced to 15 years. Loujain Al-Hathloul drove her car publicly in 2014 (contrary to the law against women driving) and her case was sent to the criminal court, but it was referred to the SCC because it was considered an act of “terror” which would tarnish the reputation of the country. ALQST has also released a detailed report on the brutal torture of Saudi women’s rights activists.

Julia Legner from MENA Rights Group focused on the shortcomings of Saudi Arabia’s legal system, and how this leads to individuals being prosecuted for peaceful acts of dissent. The fact that judges are handed excessive discretion due to the absence of a formal constitution and criminal code, paired with repressive and vaguely-worded legislation leads to the criminalisation of peaceful criticism. She explained: “The legal uncertainty means that people often don’t even know what constitutes a crime, and what they could be prosecuted for. This is used by the authorities as a tool to spread fear and intimidation, because anything you do could have legal consequences.” 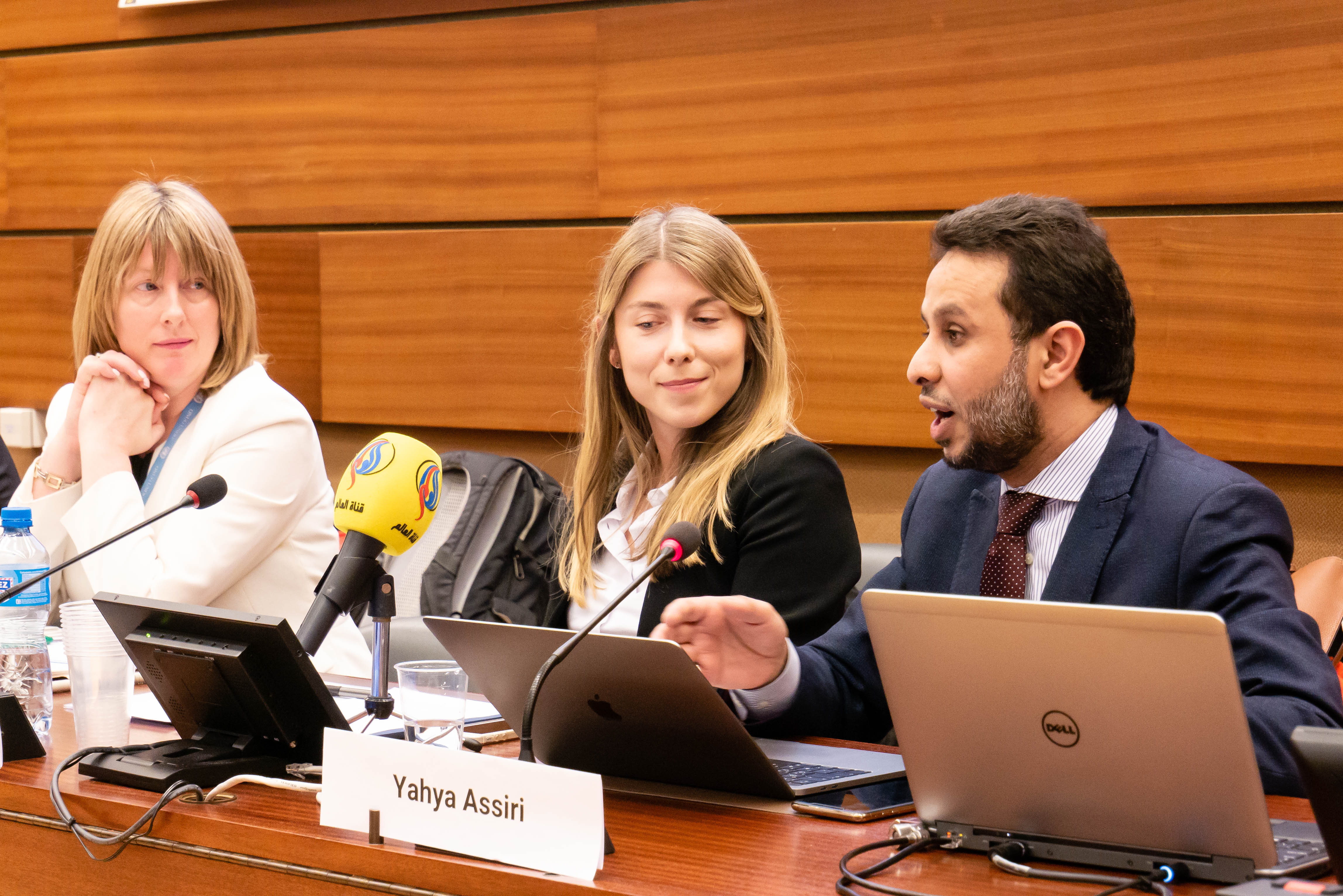 NGOs including some of the event organisers continue to urge the HRC to establish a mandate for a Special Rapporteur on the situation of human rights in Saudi Arabia, and to reconsider Saudi Arabia’s membership in the HRC, in order to hold the country accountable for human rights abuses. Participants also urged countries to prioritise human rights in their dealings with Saudi Arabia by establishing embargoes on arms sales to the country as well as the export of surveillance technology that is used to crack down on human rights defenders.

GCHR, ISHR, CIVICUS, Equality Now and Women’s March Global work in a coalition to help free Saudi women human rights defenders, and all of the event organisers signed a letter to over 30 Ministers of Foreign Affairs calling on UN Member States to adopt a resolution at the 40th session of the UN HRC calling explicitly for the immediate and unconditional release of the detained Saudi women human rights defenders and to establish a monitoring mechanism over the human rights violations in the country.