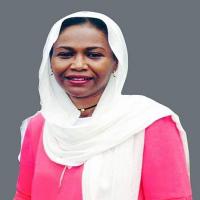 Sudanese journalist Salma Al Tigani was banned from working in the country by the National Intelligence and Security Service (NISS) on July 25, 2018.
Latest Updates
December 17, 2018: MENA Rights Group, Arab Coalition for Sudan, and Arab Media Crisis Network request intervention of UN Special Rapporteur on the promotion and protection of the right to freedom of opinion and expression
July 25, 2018: Banned from working by the NISS.
June 2018: Al Tigani banned from writing for foreign Arab newspaper due to pressure from Sudanese embassy.

After Al Tigani wrote an article about the crimes of genocide committed in the Marrah Mountains region of Darfur for a foreign Arab newspaper in June 2018, the Sudanese embassy present in the country pressured the newspaper not to publish any more of her articles.

In July 2018, Al Tigani wrote an article about the International Criminal Court’s request to apprehend the president of Sudan, which was published on both Akhbar Al Watan and Al Baath. On July 25, 2018, the NISS banned her from writing in any Sudanese newspaper by ‘blacklisting’ her. On that day, the NISS summoned the editors of Akhbar Al Watan and Al Baath and informed them of their decision to ban the publication of Al Tigani’s articles in all Sudanese newspapers.