Heading: Saudi-American doctor and TV personality sentenced to 3.2 years in prison for having expressed critical views

Heading: Saudi-American doctor and TV personality sentenced to 3.2 years in prison for having expressed critical views 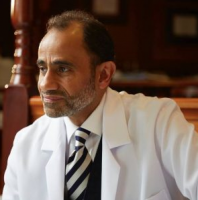 Fitaihi was arrested in Jeddah in November 2017 by police officers dressed in civilian clothes, and subsequently detained in the Ritz Carlton Hotel in Riyadh. In January 2018, he was transferred to Al Ha’ir Prison in Riyadh, before being moved again to Dhahban Prison in January 2019. Fitaihi was subjected to torture in all three locations, as a result of which he was transferred to Dhahban Prison’s hospital. Fitaihi has not appeared before a judicial authority, nor has he been informed of the charges against him. He was temporarily released on July 31, 2019. He was sentenced to six years in prison in December 2020 before his sentence was reduced on appeal on January 14, 2021.

On November 5, 2017, Fitaihi was arrested from his office in Jeddah by police officers dressed in civilian clothes. The officers did not present an arrest warrant, nor did they provide any reason for his arrest.

The officers informed his family that they wanted to question him, and that he would be released later the same day. However, Fitaihi was taken instead to the Ritz Carlton Hotel in Riyadh, where he was detained for around three months.

Fitaihi was subjected to torture in all three detention facilities, including being beaten, stripped naked, flogged and electrocuted. As a result of the torture he endured – which also led to the significant deterioration of his mental state – Fitaihi was transferred to Dhahban Prison’s hospital shortly after being moved to the facility. His family has only been allowed to visit him intermittently.

On July 31, 2019, Fitaihi was temporarily released pending his trial. He was sentenced to 6 years in prison in December 2020 before his sentence was reduced on appeal on January 14, 2021. He was also given a 38 months travel ban.

Fitaihi’s arrest was part of a larger campaign of mass arrests initiated by Mohammed Bin Salman following his accession to the position of crown prince. In November 2017, an estimated 200 Saudi businessmen, government officials and members of the royal family were rounded up and detained in the Ritz Carlton Hotel in Riyadh in what the Saudi authorities referred to as an “anti-corruption” drive. While many have since been released after reaching settlements, the cases of others have been referred to criminal courts.