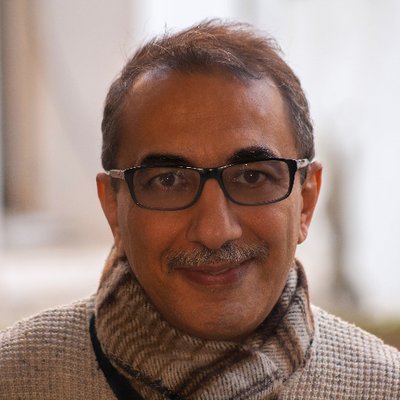 Lire la page en français
Following the Hirak pro-democracy protest movement, Algerian journalist Ihsane El Kadi faced several charges directly related to his work as a journalist. Although some of these charges were dismissed, he was sentenced on June 7, 2022 by the Sidi M'Hamed court in Algiers to six months’ imprisonment, without a detention order, for an opinion article published on Radio M. In a separate case, he was arrested on December 24, 2022 then remanded in custody on December 29, 2022 pending trial. The accusations he is facing fall under articles 95, 95 bis and 96 of the Penal Code on the receipt of foreign funding for political propaganda purposes. He is currently detained in the El-Harrach penitentiary centre.

Ihsane El Kadi is a journalist and Director of the Media Division of Interfaces Médias, which publishes Radio M and the news website Maghreb Émergent. These two platforms are considered to be among the last independent media outlet in Algeria.

Between 2019 and 2021, El Kadi expressed his support for the pro-democracy protest movement in Algeria, known as Hirak. Radio M and Maghreb Émergent continued to cover the popular protests. In three years, he has been prosecuted in four separate cases, described by his supporters as a form of “judicial harassment”.

Following an opinion piece published on the Radio M website on March 23, 2021 calling for the inclusion of all ideological tendencies in the Hirak, including the Rachad movement, the Minister of Communication at the time, Amar Belhimer, initiated proceedings against El Kadi for “disseminating false information that could undermine national unity”, “disrupting the elections” and “reopening the file on the national tragedy”. El Kadi was placed under judicial supervision on May 18, 2021 by the investigating judge at the Sidi M’hamed court in connection with this case. Rachad and the Movement for the Autonomy of Kabylia (MAK) were considered by the High Security Council as terrorist organisations in May 2021.

El Kadi was arbitrarily arrested by the security services as he left his office in Algiers-Centre on June 10, 2021, on the eve of the legislative elections. He was then interrogated at the Antar barracks and released 30 hours later. According to Amnesty International, his arrest constitutes a restriction of the rights to freedom of expression and association in the run-up to contested legislative elections.

On February 24, 2022, El Kadi’s name appeared in the case file of Algerian activist Zaki Harnache following the latter’s presentation before the investigating judge of the Sidi M'hamed court. Zaki Harnache was then charged with, among other things, “apology for terrorism”, “receiving funds from an institution inside or outside the country” and “undermining state security”. Hannache was arrested on March 18, 2022 and provisionally released on March 30, 2022.

In another case, El Kadi was informed on March 20, 2022 that he was being prosecuted for “belonging to a terrorist organization” following a hearing at liberty before the investigating judge of the Larbâa Nath Irathen court in the wilaya of Tizi Ouzou. The case was then transferred to the court of Sidi M'hamed.

At the end of the proceedings initiated by the former Minister of Communication, El Kadi was sentenced on June 7, 2022 by the Sidi M'Hamed court in Algiers to six months in prison and a fine of 50,000 Dinars (≃320 Euros). Although the sentence was not accompanied by a detention order, his sentencing goes against article 54 of the Algerian Constitution of 2020, which states that “the offence of the press cannot be sanctioned by a custodial sentence.”

On November 17, 2022, the various terrorism charges against El Kadi were all dropped.

On the night of December 23-24, 2022, after midnight, members of the Directorate General of Internal Security (DGSI) arrested El Kadi. The next day, the headquarters of Interface Médias was searched and sealed. He was then taken into custody at the Antar barracks.

During his custody, on December 25, 2022, the Sidi M’hamed court in Algiers confirmed the first instance judgment relating to the proceedings brought by the former Minister of Communication. The appeal trial took place on December 18, 2022.

Thus, on December 29, 2022, the public prosecutor announced the placement of El Kadi in pre-trial detention, explaining that he is accused of “receiving funds from a foreign source for political propaganda purposes”, “receiving funds and benefits from organisations and individuals from within the country and from abroad with the intention of committing acts likely to undermine the security and stability of the State, national unity and territorial integrity” and “publishing to the general public content likely to harm the national interest and collecting donations without authorization”. This is the fourth case brought against El Kadi.

El Kadi’s lawyers submitted an application for provisional release on January 2, 2023. This request should have been examined on January 18, 2023. However, the examination of this request was moved to an earlier date: on January 15, the Indictment Chamber of the Court of Algiers decided to maintain El Kadi in pre-trial detention. Neither El Kadi nor his lawyers attended this hearing as they had not been notified in advance.

In reaction, El Kadi’s legal team considered that “the attitude of the Indictment Division of the Court of Algiers constitutes a flagrant violation of the aforementioned constitutional provisions, the Code of Criminal Procedure and the International Covenant on Civil and Political Rights, a violation of the right of the journalist, who is provisionally incarcerated, to a fair trial, and a lack of respect through the exclusion of the defence team as an essential partner in the quest for justice.”

January 18, 2023: MENA Rights Group requests the intervention of the Office of International Standards and Legal Affairs of the UNESCO.
January 15, 2023: The indictment division of the Algiers Court decides to keep El Kadi in pre-trial detention.
January 2, 2023: El Kadi's lawyers apply for provisional release.
December 29, 2022: El Kadi is prosecuted under articles 95, 95 bis and 96 of the Criminal Code, relating to the receipt of funds from abroad, and placed in pre-trial detention.
December 25, 2022: El Kadi’s sentence concerning the proceedings initiated by the former Minister of Communication is upheld on appeal ; the headquarters of Interface Médias are searched and sealed.
December 24, 2022: El Kadi is arrested.
November 17, 2022: The various terrorism charges against El Kadi are dropped.
June 7, 2022: El Kadi is sentenced by the Sidi M'Hamed court in Algiers to six months' imprisonment and a fine of 50,000 Dinars in the proceedings initiated by the former Minister of Communication, Amar Belhimer.
March 20, 2022: The investigative judge at the Larbâa Nath Irathen court informs El Kadi that he is being prosecuted for “membership of a terrorist group”.
February 24, 2022: El Kadi's name is mentioned in the case file of Algerian activist Zaki Hannache when the latter is presented before the investigating judge of the Sidi M'hamed court and charged with, among other things, “apology for terrorism”, “receiving funds from an institution inside or outside the country” and “undermining state security”, and placed in provisional detention.
February 18, 2022: Human rights defender Zakaria (“Zaki”) Hannache is arrested.
June 10, 2021: El Kadi is arrested and interrogated at length in the Antar barracks.
Late March 2021: The former Minister of Communication, Amar Belhimer, files a complaint against El Kadi following the publication of an opinion piece on Radio M on March 23, 2021.

May 11, 2021
Algerian Islamologist sentenced to three years in prison for "offending Islam"

September 17, 2020
Khaled Drareni sentenced on charges related to his work as a journalist