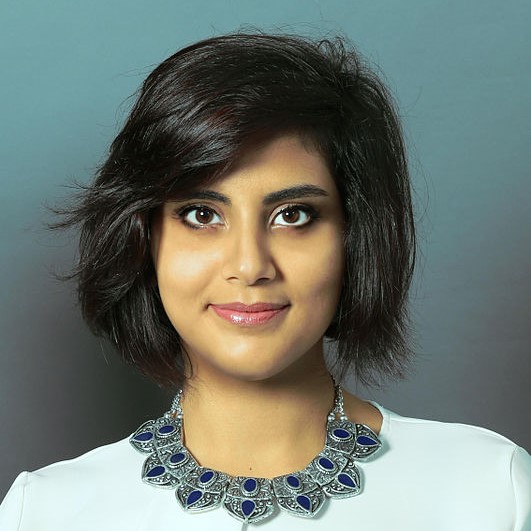 On May 15, 2018, in reprisal for engaging with the UN human rights mechanisms, Saudi police forces raided Loujain Al Hathloul’s home, arrested her and held her incommunicado for three months. Her trial began on March 13, 2019 and remains ongoing, as hearing dates have been repeatedly postponed.

Loujain Al Hathloul is a prominent Saudi human rights defender who campaigned against the driving ban and the male guardianship system. On February 27, 2018, Al Hathloul attended the session of the Committee on the Elimination of Discrimination against Women (CEDAW), during its consideration of Saudi Arabia, in Geneva.

In March 2018, after returning to her place of residence in Abu Dhabi, UAE, Al Hathloul was arrested by Emirati authorities and taken to Riyadh by Saudi authorities for interrogation. After three days she was released and a travel ban was imposed.

On May 15, 2018, Saudi police forces raided Al Hathloul’s home in Saudi Arabia and arrested her. Al Hathloul was then held incommunicado by the authorities for three months, during which she was beaten, waterboarded, given electric shocks, sexually harassed, and threatened with rape and murder. On June 14, 2018, several special procedures mandate holders expressed their concerns and called on the Saudi authorities to respond to allegations in relation to her case.

In 2018 the CEDAW Chair and Focal Point on Reprisals wrote confidential letters to the Government related to the allegations of her arbitrary detention and degrading treatment and punishment.

On March 13, 2019 Al Hathloul’s trial began before the Criminal Court. It is believed that she is being tried for charges including “undermining public order, religious values, good morals and private life” and “communicating with journalists, UN human rights bodies and human rights organisations”, which are deemed to be “hostile to the state”. All of her subsequent court sessions have been closed, with diplomats and journalists prevented from attending.

In July / August 2019, Saudi state security visited Al Hathloul in prison in order to negotiate a deal. In return for making a video statement denying that she was tortured, the authorities offered to release Al Hathloul. However, it is reported that she rejected this proposal.

Al Hathloul appeared before the Criminal Court in Riyadh on January 30 and February 12, 2020. In mid-March, Al Hathloul was due to appear in court again. However, her hearing date was postponed indefinitely due to the COVID-19 outbreak.

On 10 February 2021, and after 1001 days in prison, Loujain Al Hathloul was conditionally released from prison. In March 2021, a Saudi appeals court upheld her original sentence. As such, Al Hathloul is currently facing a five-year travel ban.