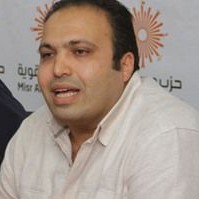 Mohammed Ali Ibrahim El Qassas, the deputy head of the Strong Egypt opposition party, was arrested on February 8, 2018, and accused of “joining a terrorist group”, “spreading false news”, and “funding a terrorist group” by the Supreme State Security Prosecution (SSSP). In August 2021, he was accused again by the SSSP of “joining a terrorist group” and “spreading false news to harm national interests”, before being brought to trial before the before the Emergency State Security Court in October. In May 2022, he was sentenced to 10 years in prison. El Qassas is currently held in the Maximum Security Tora prison.

Mohammed Ali Ibrahim El Qassas is an Egyptian activist and the deputy head of the Strong Egypt opposition party.

On February 8, 2018, El Qassas was arrested and forcibly disappeared for two days until he appeared before the SSSP on February 10, 2018. He was interrogated in Case No. 977 of 2017 (known as the “Mekamleen 2 Case”, which included several journalists and politicians) and accused of “joining a terrorist group”, “spreading false news”, and “funding a terrorist group”. He remained in solitary pre-trial detention in the Maximum Security Tora Prison for the whole duration of his detention. Visits from his family and his lawyer were often prohibited for long periods. During the detention renewal hearings, El Qassas was not allowed to talk to his lawyers privately, and was only able to see them through a glass barrier. The SSSP also failed to provide evidence to justify his placement in pre-trial detention.

On December 9, 2019, a court ordered El Qassas’ release with a condition of residence. However, he was never released, as State Security blocked the release order, and on December 15, 2019, he was taken to SSSP to be questioned as part of a new case (Case No. 1781 of 2019), and accused of “joining a terrorist group”, “spreading false news”, and “funding a terrorist group” – the very same accusations as in the first case.

On June 27, 2021, El Qassas was brought before the SSSP to be interrogated in a third case (Case No. 440 of 2018). In relation to this latter case, on August 31, 2021, the SSSP referred El Qassas to trial before the Emergency State Security Misdemeanour Court for “joining a terrorist group” and “spreading false news to harm national interests”, in the same case as Abdelmoneim Abu El Foutouh.

On December 2, 2021, MENA Rights Group submitted El Qassas’ case to the UN Working Group on Arbitrary Detention, asking them to issue an Opinion as to the arbitrary nature of his detention. MENA Rights Group highlighted the fact that El Qassas was subjected to the practice of “rotation” (tadweer), which is used by the Egyptian authorities to circumvent pre-trial detention maximum periods and prolong the detention de facto indefinitely.