Mazin Hammoush disappeared since arrest by Syrian government forces in 2013

Mazin Hammoush disappeared since arrest by Syrian government forces in 2013 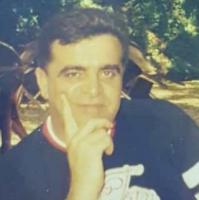 Mazin Hammoush was arrested on June 9, 2013 at his home in Aleppo. His family has been prevented from seeing him since his sentencing by a military field court.
Latest Updates
March 18, 2019: MENA Rights Group requests intervention of UN Working Group on Enforced or Involuntary Disappearances.
February 2014: Family enquires about his fate and whereabouts with the military police in Qaboun.
September 5, 2013: Last seen by his wife in a detention centre run by the military police in Aleppo.
June 9, 2013: Arrested by members of the police department of Al Jamelaiah, Aleppo.

After having fled his home village of A'zaz, Mazin Hammoush was residing with his family in Al Jamelaiah neighbourhood of Aleppo. On June 9, 2013, local policemen arrested him before taking him to the police station of Al Jamelaiah. He was suspected of not holding a valid rental agreement. His family was later informed that one of Hammoush’s relatives reported him to the police, accusing him of being the deputy leader of an armed group affiliated with the opposition.

About a week after his arrest, he was transferred to the criminal security service branch and subsequently to a branch of the military police in Aleppo, where his wife was able to visit him until September 2013.

In November 2013, his family went to the military police to visit him but was informed informally that he had been transferred to Sednaya prison. In February 2014, his wife tried to enquire about his fate and whereabouts with the military police in Qaboun, who informed her that her husband had been sentenced by a military field court, thereby preventing him from receiving family visits in prison. Since then, she has received no further information about him.