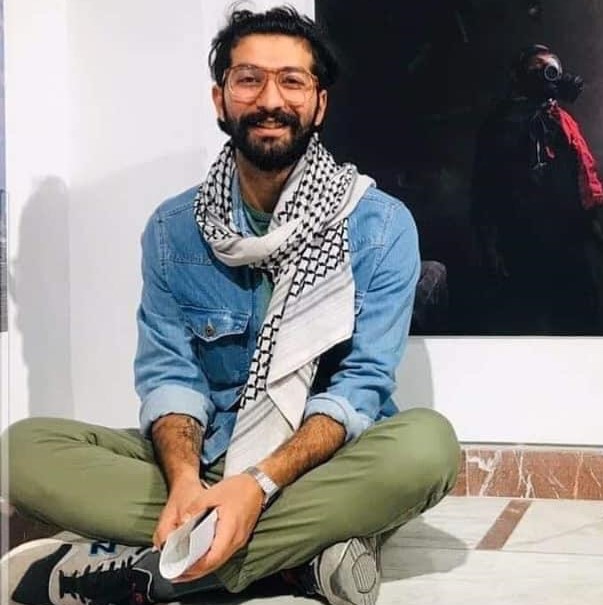 At 4 a.m. on December 6, 2019, Zaid Al Bahadeily was abducted opposite his home whilst returning from a demonstration. Witnesses believe that the abduction was carried out by militia members in civilian clothes. Al Bahadeily’s whereabouts remained unknown until his release on December 12.
Latest Updates
December 12, 2019: Al Bahadeily is released.
December 10, 2019: The UN Committee on Enforced Disappearances request that the Iraqi authorities take urgent action to locate Al Bahadeily, place him under the protection of the law, and identify the perpetrators.
December 9, 2019: MENA Rights Group requests the urgent intervention of UN Committee on Enforced Disappearances.
December 7, 2019: Family file complaints at several police stations in Baghdad, to no avail.
December 6, 2019: Al Bahadeily is abducted outside his home in Baghdad.
October 1, 2019: Anti-government protests begin in Baghdad.

Zaid Al Bahadeily, a young freelance photographer, was returning home from an anti-corruption demonstration in Baghdad when he was abducted opposite his house at 4 a.m. on December 6, 2019.

There were several witnesses to the abduction, who have verified that the perpetrators were dressed in civilian clothes and driving a car. Although Al Bahadeily’s family has not received any information concerning the perpetrators responsible for his enforced disappearance, they believe he was abducted by a militia group acting with the authorisation, support, acquiescence or approval of the Iraqi government.

A rising number of abductions of a similar nature have recently been reported in Baghdad, indicative of a pattern of enforced disappearances directed against peaceful anti-government demonstrators.