On May 19, 2021, a coalition of 11 organisations jointly called on Saudi Arabia to return the remains of those executed by the Saudi authorities. In their joint-statement, the undersigned organisations additionally called for those responsible for the April 2019 mass execution of 37 people to be held accountable.

On 23 April 2019, the Government of Saudi Arabia executed 37 persons in the largest mass execution of children, and the second-largest mass execution, to date during the reign of King Salman and his son, Crown Prince Mohammed bin Salman. Since 2019, the government has compounded the tragedy, refusing to return the remains of many of those executed to their families, denying them the right to truth and violating the absolute prohibition of torture and other inhumane acts.

In commemoration of the anniversary of this gruesome date, and in solidarity with the victims’ families, we, the undersigned organizations and individuals, call for those responsible for the massacre to be held accountable, and for the remains of the deceased to be returned to their families. They should be allowed to bury and mourn their loved ones in accordance with their traditions and cultural and religious beliefs and practices.

Many of those executed were convicted on the basis of confessions extracted under torture and for offenses the basis of which may have been the exercise of their internationally-protected rights to freedom of expression and peaceful assembly. At least six children were among those killed in the mass execution, which ultimately contributed to Saudi Arabia executing a record-high 185 persons that year. The families of those executed were subject to abuse and mistreatment by the authorities’ failure to notify them of the upcoming executions. Families learned of the death of their loved ones through the media, when the Saudi government released the information in a public news broadcast. At no point prior to the mass execution were the families contacted or given an opportunity to say goodbye.

Today, the government continues to torment many of the families by refusing to return the remains of those it executed, thereby not only denying these families their right to say goodbye, but also their right to mourn. Such cruel and emotionally bankrupt practices are not new: in 2016, the authorities refused to return the remains of four persons killed in another mass execution – including those of Sheikh Nimr al-Nimr, a peaceful social activist in Saudi Arabia, and of the minor Ali al-Ribeh. In total, Saudi Arabia has refused to return the bodies of at least 83 persons of Saudi nationality, including those of at least eight people executed for alleged offences committed when they were children – along with those of countless migrant laborers.

The government’s failure to return the bodies also has raised serious concerns among the family members that the bodies have been mutilated or otherwise mistreated. The dreadful murder of Jamal Khashoggi in 2018, and the manner in which he was reportedly dismembered, has caused family members to speculate that their own loved ones may have been subjected to similarly gruesome and inhumane practices.

The case of Mujtaba al-Sweikat, a child at the time of his alleged crime, illustrates the experience of the victims and their families. Mujtaba was arrested by Saudi authorities at King Fahd airport as he was about to board a plane to begin his studies at the University of Michigan in the United States. He was 17 years old at the time of his alleged offence, and was 18 years old at the time of his arrest. Government agents then tortured Mujtaba, beating him and burning him with cigarettes until he confessed that he had thrown Molotov cocktails at security officers. Research by Reprieve and the European Saudi Organization for Human Rights shows that in fact Mujtaba’s only “offense” had been repeated peaceful participation in protests against the government. After a trial marred by due process violations, the court convicted Mujtaba and the authorities ultimately executed him on 23 April 2019. Today, the government refuses to return his body to the family, citing security concerns. His family has repeatedly insisted that the government return his remains, stating that they “want to bury him in his land… where he was raised.”

People involved in peaceful political opposition or dissent are not the only ones affected by this  particular manifestation of Saudi cruelty – the government also refuses to repatriate the remains of many executed migrant workers. Since the beginning of King Salman’s reign, the Government of Saudi Arabia has executed at least 337 foreign nationals, many of whom appear to be migrant workers. Research by the European Saudi Organisation for Human Rights[1] shows that only a handful of their bodies have been returned to their families. In January 2020, for example, the government executed Egyptian national Muammar al-Qaddafi. Muammar was arrested in August 2017 and tortured into confessing to drug smuggling, for which the he was convicted and executed. Despite numerous demands from his family, the government has obstinately refused to return his remains, denying his wife her right to mourn his death. Similar cases have been documented in Pakistan, the Philippines, and Ethiopia, and are likely to occur in any other country where migrant workers travel to work in Saudi Arabia.

The right to bury and mourn the dead is protected under Articles 18 and 27 of the Universal Declaration of Human Rights. The families of the dead have the right to know how their loved ones died and how and where they were buried. They have the right to mourn their loved ones, to erect monuments to their lives, and to pay their respects in the manner of their communities. The Saudi government has denied these rights to too many, and we, the undersigned organizations, call for those rights to be restored.

[1] Data collected and held on file by the European Saudi Organisation for Human Rights. 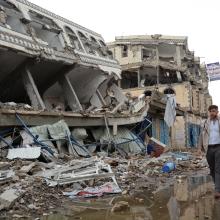