On May 14, 2021, MENA Rights Group joined a coalition of 12 NGOs calling on the U.S. government to help lift the travel ban imposed by the Saudi authorities against Loujain Al Hathloul. In their letter, the coalition expressed their deep concern about Al Hathloul's safety if she were to remain in Saudi Arabia.

We, the undersigned international human rights organizations, write to you with extreme concern regarding the travel ban imposed by Saudi Arabia on women’s rights activist Loujain Alhathloul and urge your administration to take action to help lift the ban.

Loujain is one of Saudi Arabia’s most prominent human rights defenders. In May 2018, she was arrested and imprisoned in retaliation for her work promoting women’s rights and calling for an end to the male guardianship system. On February 10, 2021, after more than 1,000 days of imprisonment, Loujain was conditionally released. The Specialized Criminal Court sentenced her to five years and eight months in prison, with a partial suspension of two years and 10 months, on charges related to her human rights advocacy, including communicating with Saudi human rights activists living abroad, foreign journalists in Saudi Arabia, and European diplomats. Despite her release, she remains subject to three years of probation and a five-year travel ban imposed by the court. Furthermore, her parents have been subjected to a travel ban since her arrest.

While imprisoned, Loujain was repeatedly tortured. She was kept in an unknown location between May and August 2018 where Saudi officials abused her with electric shocks, flogging, waterboarding, and threats of rape and sexual assault. In September 2019, Crown Prince Mohammed bin Salman stated during a televised interview with CBS journalist Norah O’Donnell that he would personally follow-up on Loujain’s allegations of torture. A court finally issued a report in December 2020 concluding that Loujain had not been tortured. This determination was made after a cursory medical examination conducted three years after the abuse occurred. Moreover, after repeatedly refusing Loujain’s requests for video footage and other documentation that would prove that torture took place, the court ruled that the burden of proof was on her to provide evidence of her torture.

During her unlawful detention, Loujain was frequently denied the right to visit or communicate with her family. Beginning in April 2020, the Saudi government used the COVID-19 pandemic as an excuse to sever all contact, including telephonic, between Loujain and her family until August 2020 and again between September and October 2020. Communication was only permitted after Loujain began hunger strikes.

Although we are thankful that Loujain is no longer imprisoned, we are deeply concerned about her safety if she remains in Saudi Arabia. As has been determined by the United Nations Working Group on Arbitrary Detention, Loujain’s conviction and imprisonment violated international law. Along with an unlawful travel ban, these measures have been taken to silence her. Under the conditions of her probation, she could be re-arrested at any time for any perceived illegal activity. As she continues to fight for justice and the full liberty to which she is entitled, Loujain should be allowed to voice her opinions peacefully in accordance with Saudi and international law. However, the Saudi government will likely perceive her continued public advocacy as a direct threat. This is particularly troubling as the government has repeatedly demonstrated its willingness to silence dissidents and activists at any cost, as evidenced by the brutal murder of Jamal Khashoggi. The travel ban is as unlawful as the imprisonment and sentence, and should be lifted.

We are grateful that your administration called for Loujain’s release from prison, but if prohibited from leaving Saudi Arabia, she remains highly vulnerable to abuse and re-arrest. She will not be safe or truly free until the arbitrary travel ban is lifted. Under international law, every person has the right to leave and return to their own country. We urge your administration to take action to help facilitate the lifting of the travel ban imposed on Loujain, so that she may leave the country should she wish or feel it necessary to do so. Such an action will resoundingly demonstrate the U.S. commitment to protecting brave human rights defenders who have sacrificed so much to make their communities and the world a better place. 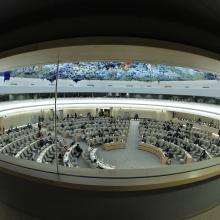 Coalition letter to the UN Human Rights Council on Pegasus