A coalition of 14 NGOs delivered a joint letter to Hilary Clinton, the former United States Secretary of State, Melanne Verveer, the Executive Director of the Georgetown Institute, and Agathe Christien, the Hillary Rodham Clinton Research Fellow at the Institute, urging them to withdraw from a Georgetown event sponsored by the government of the United Arab Emirates (UAE). 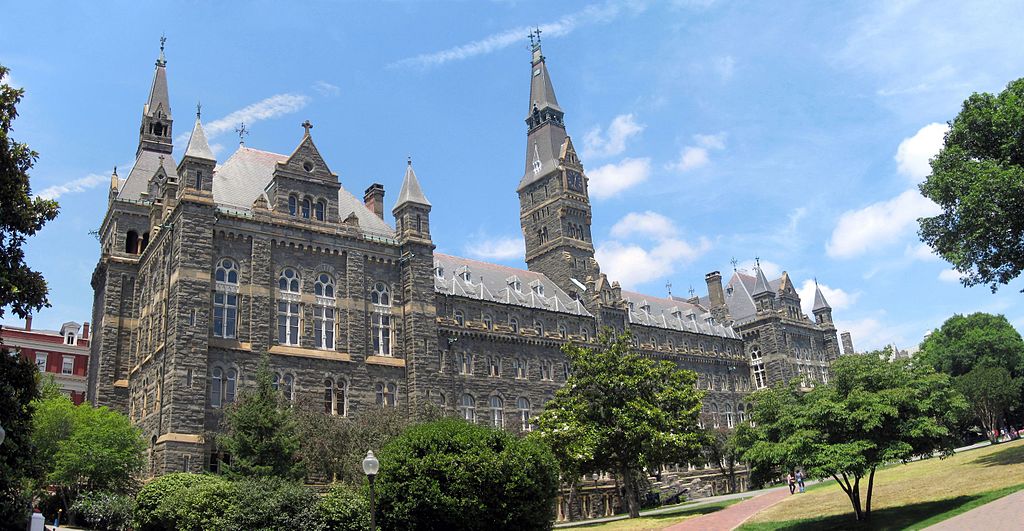 We are deeply disturbed to learn of your participation in a joint Georgetown event with the government of the United Arab Emirates. The so-called “Advancing Women’s Participation in Post-Conflict Reconstruction” event on November 11, 2020, risks creating a propaganda platform for the UAE government that it can use to hide its repression, war crimes, and violations of women’s rights. It also tarnishes your own reputation and credibility by associating with a government intent on buying a better image for itself through lucrative funding of American institutions.

We urge you to withdraw from this event immediately and end your association with the government of the UAE until the UAE ends its terrible record of human rights violations and violations of international law. We also urge you to disclose all financial contributions that the Clinton Foundation, Georgetown University, or other entities with which you are affiliated may have received from the UAE, and to consider returning immediately any such contributions or donations.

It is astonishing that the government of the United Arab Emirates would be allowed to host such an event and to pretend to be an advocate for women's rights or gender equality, given the UAE’s role in creating so much misery for women, girls, and civilian populations in multiple societies across the Middle East and North Africa. Together with Saudi Arabia, UAE wars and interventions have created vast amounts of suffering and death in Yemen, Libya, and the broader region. The UAE’s brutal record has only intensified under de-facto ruler Sheikh Mohammed bin Zayed bin Sultan Al Nahyan, the Crown Prince of the Emirate of Abu Dhabi. The UAE’s domestic record of abuse and repression of women and girls has furthered their marginalization, exploitation, and subjugation in the country.

As an absolute monarchy without any form of meaningful democratic representation, the United Arab Emirates has a long record of human rights violations, international humanitarian law violations, and interventions to squash regional democracy-building efforts:

The UAE violates women’s rights through discriminatory laws and repression, including its male guardianship policies, which require adult women to obtain the permission of their male guardian before they are allowed to marry.

UAE officials, including the Ruler of Dubai and Prime Minister of the UAE, Mohamed bin Rashid al Maktoum, have been personally implicated in the kidnapping, imprisonment, assault, and even torture of women, including women attempting to flee the country, with absolute impunity. Not only does the government systemically abuse women in the country, it protects those who violate the UAE’s own laws from any form of prosecution or accountability. The Ruler of Dubai continues to unlawfully detain two of his adult daughters, Sheikha Latifa and Sheikha Shamsa, following their abduction by UAE security forces from India in 2018 and the United Kingdom in 2010, respectively. They reportedly remain captive in the Ruler’s private residence. The Ruler’s wife, Princess Haya, was forced to flee the country after facing a “utterly terrifying” campaign of intimidation and harassment by the ruler.

The UAE continues to implement a legal system that discriminates harshly against women in divorce, child custody and inheritance. The legal system in place leaves women trapped in abusive marriages and facing the loss of all economic support and custody of their children if they seek to divorce their spouses. Women are entitled to a fraction of the inheritance their brothers receive. Women in the UAE are still treated as subordinate to men under the law. In 2019, the authorities amended  the law to remove the requirement that women should obey their husbands and in 2020 introduced other minor amendments on obligations to appear more gender neutral. However, such changes merely remove discrimination in law but essentially still allow for judges to discriminate against women in practice. Marital rape is not a crime in the UAE.

The rulers of the UAE have wrongfully detained, tortured, and allowed women to die in their prisons. Loujain al-Hathloul is a prominent Saudi women’s rights defender who was subjected to cyberattacks by the UAE authorities, who hacked into her email before arresting and forcibly transferring her to Saudi Arabia in 2018. She has been brutally tortured and remains in prison today in Saudi Arabia in reprisal for her activism. In 2019, Alia Abdulnoor died in a prison in the UAE, just two months after the UN had specifically called for her release. Another detainee mentioned in UN communications, Maryam AlBalushi, had leaked accounts of torture in prison and reported being held in solitary confinment on charges of “damaging the UAE’s reputation.” AlBalushi reportedly attempted suicide in March of 2020.

The UAE has failed to offer meaningful protection for millions of women who work as domestic workers in the country, and who have experienced widely documented abuse, exploitation, and non-payment of wages in a system that can amount to forced labor.

In the UAE, foreign employees remained tied to their employers as their sponsors in the country. Foreign residents require the permission of their sponsors to change jobs or leave their employer, and keep their status in the country legal. The wages for household workers in the UAE are extremely low relative to the cost of living. As a result, migrant workers often suffer from inadequate standards of living. Migrant workers are routinely overworked, refused days off, forbidden from exiting the household, routinely refused or delayed payments, and often abused.  Migrant domestic workers are often women and face significant risk of sexual violence.

The UAE monarchy has jailed or imprisoned dozens of prisoners of conscience, people who have engaged in the peaceful and nonviolent expression of their views. Imprisoned voices of reform include human rights activist Ahmed Mansoor, academic Nasser bin Ghaith, and human rights lawyer Mohammed al-Roken.

Despite vague assurances in the UAE Constitution, citizens have no enforceable civil and political rights. Significant human rights issues, as documented by the US State Department 2019 Country Report on Human Rights Practices, included: “allegations of torture in detention; arbitrary arrest and detention, including incommunicado detention, by government agents; political prisoners; government interference with privacy rights; undue restrictions on free expression and the press, including criminalization of libel, censorship, and internet site blocking; substantial interference with the rights of peaceful assembly and freedom of association; the inability of citizens to choose their government in free and fair elections; and criminalization of same sex sexual activity.”

Driving Vast Suffering for Women and Civilian Populations in Yemen

In Yemen, the UAE has killed thousands of civilians and helped decimate the impoverished country’s healthcare system as part of a military coalition led by Saudi Arabia and armed by the U.S. The UAE has helped drive millions to the brink of starvation under an unlawful siege of Yemen’s land, air and water borders, and facilitated the spread of the Coronavirus pandemic, with particularly harsh effects on women and girls. The UAE has also operated secret detention centers in Yemen where rape, sexual assualt, torture, and other abuse of detainees, including of women, has been extensively documented. Prior to the Coronavirus pandemic, reports already indicated that 85,000 children had died of starvation, and two million children under five and 1.1 million pregnant women and new mothers are now acutely malnourished.

Unlawful Transfer of Arms to Libya

The UAE continues to violate the UN Security Council Resolution 1970 arms embargo on Libya by the ongoing provision of military assistance to armed groups in Libya, in its support of  warlord Khalifa Haftar in his violent campaign against the Libyan Government of National Accord. The UN Panel of Experts monitoring the sanctions regime condemned the UAE’s unlawful provision of arms in Libya just two months ago. The UAE has itself carried out aerial attacks on civilians in Libya, including a drone attack on a factory that killed 8 civilians and a military academy that killed 26 cadets.

Since last April alone, the UAE conducted more than 850 indiscriminate drone and jet strikes on Haftar’s behalf, striking homes and civilian institutions. This year, the UAE sent over 100 airlifters suspected of carrying weaponry to Haftar’s forces. The UAE sent U.S. planes to Libya’s civil war, and although the UAE denied having done so, satellite images confirmed the planes’ shipment. With UAE support, Haftar launched attacks and indiscriminately bombed civilians, including strikes on or near heath care facilities.

The UAE and Saudi Arabia have supported Al Qaeda-affiliated individuals, networks, and militias in Yemen, including by reportedly providing them with arms, military assistance, and funding. The UAE has permitted weapons purchased from the U.S. to be given to, sold to, or captured by local militias, as well as extremist groups such as Al Qaeda in the Arabian Peninsula. The UAE and Saudi Arabia have also paid, protected, and even recruited Al Qaeda fighters in Yemen.

Together with its Saudi ally, the UAE intervenes across the Middle East and North Africa to stop democracy and promote dictatorship, including in Bahrain, Egypt, Sudan, and Libya. In Bahrain, UAE and Saudi forces worked with Manama to crush the country’s 2011 pro-democracy movement. Following the democracy protests that began on February 14th, 2011, Saudi and UAE military forces led Gulf Cooperation Council troops (GCC) to march into Bahrain, attack peaceful protesters, and help crush the democracy movement. In Sudan, the UAE and Saudi Arabia attempted to undermine the nation’s pro-democracy movement by supporting the “transitional military council” that sought to maintain military rule after the country’s dictator Omar al-Bashir was driven from power. And in Egypt, both the UAE and Saudi Arabia have repeatedly backed Egyptian dictator Abdel Fattah el-Sisi. The UAE supported the military coup in Egypt in 2013 with $3 billion in aid, and continues to provide financial assistance to the Egyptian government.

Together with its Saudi ally, the UAE monarchy is responsible for gross violations of international human rights and humanitarian law across the Middle East and North Africa. Against this backdrop, it is astonishing that you would consider the UAE government to be a suitable partner for an event on women and post-conflict reconstruction. We urge you to cancel this event, end your partnership with the UAE government, and reveal and return all funding from this brutal monarchy.

Democracy for the Arab World Now