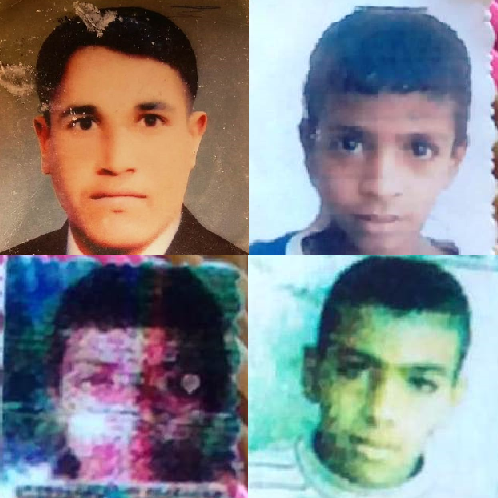 On October 13, 2015, at least 70 individuals, including Naeem Daham and three brothers, Mahmoud, Khodeir and Muthana Khodeir, were arrested by members of the Saraya Al Salam militia during a campaign of mass arrests that occurred inside the Ishaqi camp. Mahmoud and Naeem were minors at the time their disappearance. Their fate and whereabouts remain unknown to date.
Latest Updates
August 19, 2019: MENA Rights Group requests the urgent intervention of the UN Committee on Enforced Disappearances.
October 13, 2015: At least 70 individuals, including Mahmoud Khodeir, Mohammad Khodeir, Muthana Khodeir and Naeem Daham, are arrested at Ishaqi camp by the Saraya Al Salam militia.

On June 22, 2015, in the context of the fight against ISIL, the Khodeir and Daham families fled from Al Farhatah in Iraq’s Saladin governorate to seek refuge at Ishaqi camp.

On October 13, 2015, the Khodeir brothers and Naeem Daham were arrested inside the camp. That very same day, around 70 other inhabitants of Ishaqi Camp were also arrested in similar circumstances during a campaign of mass arrests conducted by the Saraya Al Salam militia, which controls the camp. They were all taken to an unknown location.

The Saraya Al Salam militia is part of the Popular Mobilisation Units (PMU), an umbrella organisation composed of various militias that supported the Iraqi armed forces during the fight against ISIL. On December 19, 2016, the PMU were incorporated into the Iraqi armed forces, and on March 8, 2018, a Prime Minister’s decree formally included the group into the country’s security forces.

The families of the disappeared were not able to submit a complaint for fear of arrest or reprisals as Ishaqi Camp is still under the control of the Saraya Al Salam militia. Their fate and whereabouts remain unknown to date.